From Wikipedia, the free encyclopedia

Jump to navigationJump to search

He was born in Cape Town to Ralph Josef Feinstein and Erika Hemmer. He graduated from Wynberg Boys’ High School in 1981, and received further education at King’s College, Cambridge, the University of California at Berkeley and the University of Cape Town. He married Simone Sultana on 18 December 1993, and has a son and a daughter. His interests include reading, classical & jazz music, cinema, theatre, watching rugby, cricket & soccer.[1]

A member of the African National Congress (ANC), his political life began when he served as an advisor to Gauteng‘s then-MEC of Finance, Jabu Moleketi, from 1994 to 1996. He also worked as an economic advisor to then-premier Tokyo Sexwale. He was elected as a member of the South African Parliament‘s lower house in 1997.

During his time in office, he served as chair of its study group on public accounts and ANC’s official spokesman on the National Assembly‘s public accounts committee. Feinstein was at the time referred to as “one of its most vocal and talented MPs”, who argued that a thorough investigation into the South African Arms Deal had to be done.[2] However, he resigned in 2001 when the ANC refused to launch an investigation into the matter.[3] He was succeeded by Geoff Doidge in both positions.

He now resides in London, where he chairs the Aids charity Friends of the Treatment Action Campaign, and lectures and writes on South Africa. He also works as a Securities Coordinator for Investec Bank UK Ltd.

He is now considered an ANC dissident and critic, with his memoirs, After the Party, being severely critical of the political culture of the ANC.

In an interview with Democracy Now!, he noted the ways in which the global arms trade was linked to the Sandy Hook Elementary School shooting.[4]

In 2011 Feinstein published The Shadow World, an investigation into the global arms industry. He reported “that the trade in weapons accounts for around 40 percent of all corruption in all world trade The .. trade in weapons is extremely closely tied into the mechanics of government. The defence manufacturers, those who make the weapons, are closely tied in to governments, to militaries, to intelligence agencies and crucially to political parties.”[5]

00:01
in the United Kingdom the agency that
00:04
investigates white-collar crime like
00:06
bribery is called the serious fraud
00:08
office the SFO and that’s where David
00:12
Lee and Peter Gardner went next the
00:15
director of the SFO was Robert Wartell
00:18
sort of unusual that a journalist comes
00:20
in to talk to a prosecutor about
00:22
whatever well he had his story at that
00:24
stage and it printed it and having
00:27
discussed it with him and seen what
00:29
evidence he had I took the view that
00:31
they were sufficient to justify a
00:33
suspicion that an offense may have taken
00:35
place and we began the process of
00:38
requiring the company to provide us with
00:40
information and documents and the
00:43
investigation began to grow and grow and
00:45
it was proceeding reasonably smoothly
00:47
although it was a very difficult one
00:49
prosecutor Helen garlic supervised what
00:52
would become the first investigation in
00:54
the united kingdom of overseas bribery
00:56
the allegation was improper expenses
00:59
that appeared to have been paid by
01:01
British Aerospace through the medium of
01:04
this small company run by Peter Gardner
01:06
as the prosecutors dug through thousands
01:10
of BAE documents and bank records they
01:12
confirmed Peter gardeners story and that
01:15
wasn’t all how would you describe the
01:18
original allegations the gardener
01:22
services to what you found in the end
01:26
they were um a drop in the ocean I think
01:30
that would be a fair way of describing
01:31
them over 60 million pounds over a
01:34
hundred million dollars was a drop in
01:35
the ocean yes relative to the amounts of
01:38
money that we were dealing with here so
01:40
we were talking about billions dollars
01:44
in the mass of documents and accounts
01:46
Helen garlics team made another
01:48
startling discovery some of the money
01:51
from the Alamo mark out around two
01:53
billion dollars had been sent to
01:56
Washington DC into the Saudi Ministry of
01:59
Defense bank accounts controlled by the
02:01
man who is credited with making the a
02:03
llamar deal Prince Bandar bin Sultan as
02:08
much as two billion dollars went to
02:11
accounts under the control of Prince
02:13
Bandar bin Sultan in Washington it’s
02:16
hard for me to believe that you didn’t
02:17
have a reaction when you found out how
02:19
much money was going west the value of
02:22
the alia mama contract itself was
02:24
astronomical it will become slightly
02:27
relative when you’re talking about such
02:29
vast sums of money as part of that two
02:33
billion dollars funds were sent to
02:35
support the crew and the fuel for a
02:37
wide-body Airbus 340 be a admit that
02:41
they made a gift of a brand-new Airbus
02:44
to Prince Bandar which he had painted in
02:47
the blue and silver colors of the Dallas
02:49
Cowboys his favorite team and has used
02:52
ever since to fly around the world and
02:53
the British investigators also uncovered
02:56
a complicated web of intermediaries and
02:59
front companies they also say oh there’s
03:01
a special separate offshore arrangement
03:04
registered in the British Virgin Islands
03:06
which was paying billions of dollars to
03:08
Swiss bank accounts British
03:11
investigators suspected that those Swiss
03:13
accounts may have benefited the man who
03:15
signed the deal Prince Bandar’s father
03:17
Crown Prince Sultan and his business
03:21
associates we believed that we could
03:24
show if we got access to the Swiss
03:27
accounts whether or not a crime had
03:30
continued to be committed right up until
03:32
the present day you had evidence already
03:34
that there were there were crimes that
03:36
had been committed yes unless i said
03:40
this story started on
https://www.youtube.com/watch?v=LFqx2sROwsE

From Wikipedia, the free encyclopedia

Jump to navigationJump to search

For the historical district in central Saudi Arabia, see Al-Yamama. 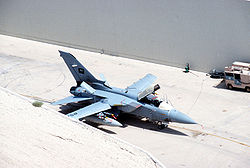 A central part of the Al Yamamah deal was the sale of Tornado fighters to the Royal Saudi Air Force.

Al Yamamah (Arabic: اليمامة‎, lit.‘The Dove‘) is the name of a series of record arms sales by the United Kingdom to Saudi Arabia, paid for by the delivery of up to 600,000 barrels (95,000 m3) of crude oil per day to the UK government.[1] The prime contractor has been BAE Systems and its predecessor British Aerospace. The first sales occurred in September 1985 and the most recent contract for 72 Eurofighter Typhoon multirole fighters was signed in August 2006.

Mike Turner, then CEO of BAE Systems, said in August 2005 that BAE and its predecessor had earned £43 billion in twenty years from the contracts and that it could earn £40 billion more.[2] It is Britain’s largest ever export agreement, and employs at least 5,000 people in Saudi Arabia.[3]

In 2010, BAE Systems pleaded guilty to a United States court, to charges of false accounting and making misleading statements in connection with the sales.[4] An investigation by the British Serious Fraud Office into the deal was discontinued after political pressure from the Saudi and British governments.

The UK was already a major supplier of arms to Saudi Arabia prior to Al Yamamah. In 1964 The British Aircraft Corporation conducted demonstration flights of their Lightning in Riyadh and in 1965 Saudi Arabia signed a letter of intent for the supply of Lightning and Strikemaster aircraft as well as Thunderbird surface to air missiles. The main contract was signed in 1966 for 40 Lightnings and 25 Strikemasters (eventually raised to 40). In 1973 the Saudi government signed an agreement with the British government which specified BAC as the contractor for all parts of the defence system (AEI was previously contracted to supply the radar equipment and Airwork Services provided servicing and training). Overall spending by the Royal Saudi Air Force (RSAF) was over £10 billion GBP (SAR 57 Billion).[5]

In the 1970s United States defense contractors won major contracts, including 114 Northrop F-5s. In 1981 the RSAF ordered 46 F-15Cs and 16 F-15Ds, followed in 1982 by the purchase of 5 E-3A AWACS aircraft. Following these deals and partly due to pro-Israeli sentiment in the US Congress, which would have either blocked a deal or insisted on usage restrictions for exported aircraft, Saudi Arabia turned to the UK for further arms purchases.[6]

The resulting elites, who control the three dominant institutions
(military, economic and political) can be generally grouped into one of
six types, according to Mills:

the “Metropolitan 400” – members of historically notable local
families in the principal American cities, generally represented on the Social Register

the “Warlords” – senior military officers, most importantly the Joint Chiefs of Staff

the “Political Directorate” – “fifty-odd men of the executive
branch” of the U.S. federal government, including the senior leadership
in the Executive Office of the President, sometimes variously drawn from elected officials of the Democratic and Republican parties but usually professional government bureaucrats”

This site uses Akismet to reduce spam. Learn how your comment data is processed.

Welsh; arianEnglish; cash; money; silver; wherewithalYOU SAY #ARYANS I SAY #ARIANS Are Price and Value the same thing and if not which one is worth more, is worth a measure of Price or a measure of Value, or is worth another name for a measure? How circular is this argument in the lexicon of What’s […]

Get Knocked Down Get Back up again. Chumbawumba Blogging.

Mind The Gap. June 21st 2022 – July 21st 2022 The Missing Month. WIll WordPress sort it out? Having a pleasant exchange with a mixture of Automatic responses and Happiness engineers who I assume are real. Wayback Machine. Room 101 recovery return to sender? back to where we started, all around my hat, Wood Stock, […]

I think it is a question of semantics and the semantics of the statement  “VALUE is not a “thing”, like electricity is the flow of electrons. Rather, value is an abstraction itself. Therefore, that device (#Quanta) which is used to express a quantity of value, must ITSELF be an abstraction” are what I was questioning. […]

DARK WINTER, CLADEX, EVENT201 #AADHAAR EVENT 201 GIVEN ITS PROPER CONTEXT IS A MONETARY SYSTEM EVENT John at the Slog and I, had a long chat yesterday afternoon. My contention was that we had won this season’s league, we had yet to win the Cup and of course next season the Authoritarian Transhumanist Globalist 11 […]

THE ONENESS of HUMANITY

For Peace On Earth In This Generation

"More than machinery, we need humanity."

We're not in Kansas anymore

The View from the Mountain

Trying to make sense of the world by seeing the wood, not the trees...

Nothing is what it seems

"There exists at least one erroneous statement on this blog."

Housing strategies for cities around the globe

Sebastian Rushworth M.D.
Isle of Dogs - Past Life, Past Lives